On Sunday, April 29 a fatal incident took place in Wabash County, Indiana. At approximately 8:00 AM a vehicle crossed the center line and struck a private sector garbage truck head-on. The driver of the vehicle and two passengers were killed in this accident. The garbage truck driver was taken to the hospital with non-life threatening injuries. Additional information on this accident is available via the Indy Channel or Abc57. This is a higher profile case as one of the victims was a suspect in a local murder case.

With this being the second recorded incident in Indiana this year, it is a good time to remind drivers and helpers of the importance of wearing seatbelts while in a moving collection vehicle. The Center for Disease Control & Prevention (CDC) estimates that more than one in three truck drivers have had a serious truck crash during their career and one in eight has had two or more. Fastening seatbelts is both effective and required by federal regulations.

SWANA released the industry’s 2017 fatality data in a press release this year. Of the 38 workers who died on the job in 2017, approximately 60 percent were killed during collection. Please encourage safety and the use of required safety equipment to all. 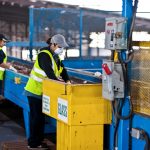