On November 7, the U.S. Bureau of Labor Statistics (BLS) released the 2018 employer-reported injury and illness data showing an increase in the solid waste collection employee incident rate and reductions for employees at solid waste landfills and material recovery facilities (MRFs).

In 2018, collection workers experienced injury and illness at a rate of 5.9 incidents per 100 full time equivalent (FTE) workers, rising from 5.2 in 2017. The rate for employees at solid waste landfills fell significantly from the previous year and is now at 3.9 incidents per 100 FTE compared to 5.3 in 2017 and 4.9 in 2016. This is the second lowest rate for landfills in the last thirteen years.

Employees at MRFs experienced illness or injury at a rate of 4.9 incidents per 100 FTE workers, compared to 9.8 in 2017. According to the BLS, because the number of incidents was small, the change in the rate is not statistically significant.  For the nine years of MRF data available from BLS, the incident rate averaged 6.53. 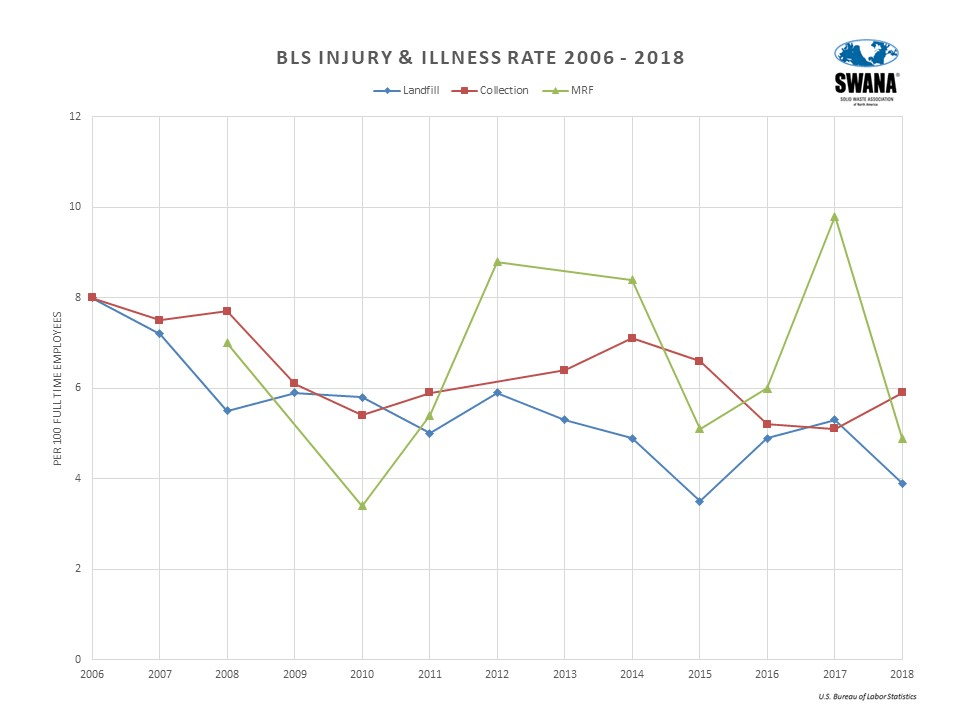 Collection workers averaged 13 days away from work as a result of a nonfatal injury or illness.  This is above the national average of 8.  The most common event or exposure was “overexertion and bodily reaction”.  The most common injuries were sprains, strains and tears.  The body parts most commonly affected included the back, hands and ankles.

BLS reports nationally there were 2.8 million non-fatal workplace injuries and illnesses reported by private industry employers in 2018, unchanged from 2017. Private industry’s incidence rate for total recordable cases (TRC) also remained unchanged from a year ago.  This is the first year since 2012 that the TRC rate did not decline.