In 2017, there were 94 members of the public killed and 38 workers on the job, with over 75 percent of the incidents involving a private sector solid waste company.

The majority of deaths involving a member of the public occurred on the roadways, with 60 percent involving a solid waste vehicle and at least one other vehicle. 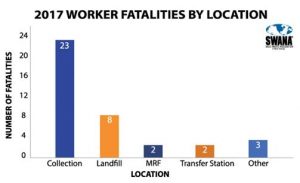 Of the 38 workers who died on the job in 2017, approximately 60 percent were killed during collection, 21 percent died at a landfill, with the remainder occurring at Material Recovery Facilities, transfer stations and other locations. A disproportionate number of these incidents involved small companies, usually haulers with fewer than 20 trucks.

This high rate among small-to-medium size haulers underscores the need for our Hauler Outreach Toolkit which is still in development, but will go live in May. A Safety Alert will be sent out when it is available. Thank you to everyone for the valuable feedback that has helped to create it.

If you will be attending Waste Expo in Las Vegas, NV next week, David Biderman will be presenting a Solid Waste Safety Update at 2:30 p.m. on Tuesday, April 24 at the SWANA Booth, #645. Even if you cannot make it to the Update, please be sure to stop by and visit with the SWANA staff. 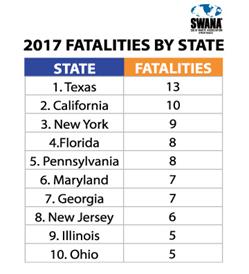 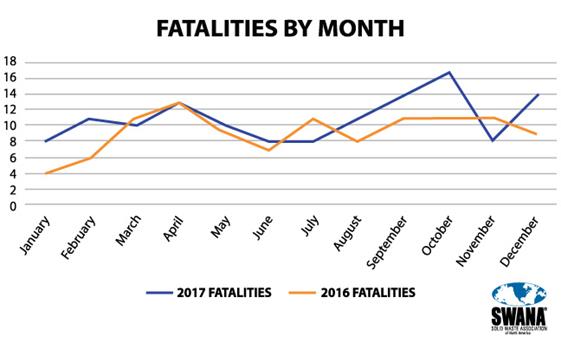